SMORE Coastal Sampling is a Success!

The Texas team packed bags, ice chests, and equipment and headed out to the Trinity River Bay this Friday, Sept. 23rd. It was the first day of Fall and the weather couldn't have been better! Clear skies, breezy, and a very comfortable temperature ONLY in the 80"s- that was a treat after the triple digit temps we've been having!


Students had been practicing their testing skills, as well as learning how to operate the loggers and sensors the weeks before the fieldwork. As the day approached for going out into the field, there was a mixture of sentiments and emotions. Everyone voiced excitement about going out to the bay, but some also talked about being nervous about doing their testing "right" :) Mrs. Lollie assured them that even Dr.Yager and her ANACONDAS  team had some of the same feelings as they headed out to the Amazon Plume!

Once we got to the first site, the training kicked in! However, as we were setting up the work stations, a million (at least) lovebugs invaded the area and were quite a distraction- until Mrs. Lollie reminded us what we were there for!!

We traveled to 2 other sites. The second was at Smith Point, about halfway down the bay. It looked more like the ocean there with waves and wind blowing a little harder. By this time we knew what do do better and it was "less scary" .

The third site was on Bolivar Peninsula, right on the beach. We had to park and work on the street side of the sand dunes, but were able to get right up on the water! Wish we could have gone in for a dip!!!!


After a long day, we headed home! Now we're looking at the data we collected and will try to figure out how it all fits together. We don't understand it all yet, but that's why we're doing this. We wonder what the other SMORE students are thinking about their fieldwork. We are planning some SKYPE  conferences with them soon! Check in next week to see what our test results were. 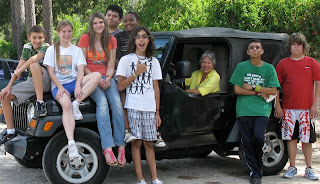 This is SMORE TX signing in for the first time! We’re very excited to be a part of this interesting project!  Since we live on the Gulf coast of Texas, we know how important the marine environment is to us. Although, we’re an hour north of the coastline, it’s still close enough for us to get there easily.
Seven major rivers empty into the Gulf of Mexico from Texas alone. Their watersheds cover hundreds of miles of across the state and have a direct impact on the estuaries and the ocean. Last year as 7th graders we did fieldwork on the freshwater systems that run behind our school down to Galveston Bay.
We have lots of questions about what we’ll find in the waterways this year when we pick up the trail farther south and into the Gulf waters. Our plan is to study the Lower Trinity River where it meets the bay and Gulf. However, the extreme drought conditions in Texas have dropped water levels in the rivers to record lows. Who knows what we’ll find!!
Our 8th grade class is small this year, but BIG in ideas J - and we’re really excited about working on the SMORE project with new friends in Alaska and Georgia and with researchers Dr. Tish Yager and Dr. Marc Frischer.
We’ll talk more about our sampling sites in the next blog. For now, hope you’re enjoying cooler weather than we are!!
SMORE TX :)
Posted by SMORE TX at 4:35 PM 0 comments