"WINTER" SAMPLING AT THE BAY

On Jan 27 we went to do our second sampling. We had many different tools that we haven’t used before like this underwater rover. 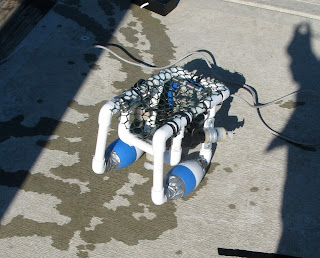 It was a rover we built 2 years ago to use on our past water sampling fieldwork. Two students were operating it. They attached a flip camera on it in a secure underwater case and lowered it into the water. 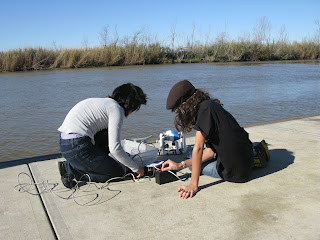 There are three motors on the rover. It can go up /down, forward, and turn. However it was not a smooth ride in the water because there was too much wave action pushing the robot upward. As a result of the turbulent waters,  the battery holder clamp  broke off, and we were not able to continue.  It was fun while it lasted though! and no, we didn't get any video...

There were also many different animals we didn’t see on the last trip . We saw red breasted blackbirds and a lot of baby ducklings at site 1. We also found many   animal prints. Some belonged to raccoons others are yet to be identified. Brown pelicans were spotted there too, which is unusual because they’re usually found farther down on the coast.

Sadly, we also saw some dead organisms in all of the sites At site one there was a dead pelican we found by the water’s edge. We have no idea what killed it or by what means but we told the a forest ranger who happened by immediately. We did not touch or move the pelican!

At the second and third site, we had seen jellyfish washed up on the shore. At the second site, many very small clear (about the size of a quarter) jellyfish were washed up between the docks. The third site had only one much larger white jellyfish. It had looked like its tentacles were severed and its head was bashed open. These occurrences were a surprise since we didn’t see anything like this the last time we tested. 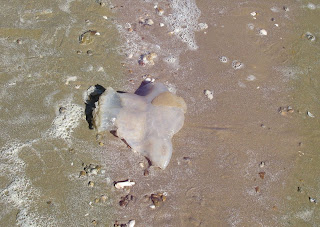 This jelly was about 10" long without the tentacles.

We think the recent rains we finally got has brought the animal life back to the bay. Water level seemed higher than the first time (remember we’ve been in an awful drought in Texas since January 2011!) We’ve had some good rains since late Nov, but we have a ways to go before we are out of the drought. Around this same time, we've had a Red Tide all along the Gulf Coast. Since we don't have as much fresh water running into the bay and gulf, salinity levels are higher- just what toxic algae like Karenia Brevis like!!

Not surprising, we didn’t see any people, this time out, well except for us. There was no sign of fishermen or tourists except for a couple of people beachcombing..

Now, about the sampling.
The first time we did the tests we were all nervous because we had never done the testing before, but the second time around we all agreed we were more confident about doing the tests. 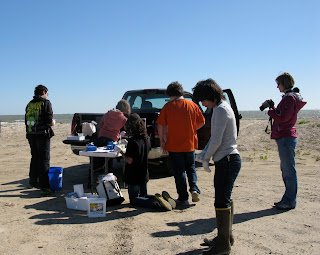 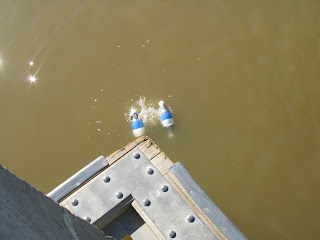 See how brown the water is here??? (rover is trying to go down!)

At the second site at Smith Point the water was green. The third site on the Bolivar Peninsula at the beach had a lot of foam but the color seemed a darker brown than in the fall (more runoff?). At all three sites it was very windy. The temperature was not very low, but the wind made it colder. Again we had clear skies. 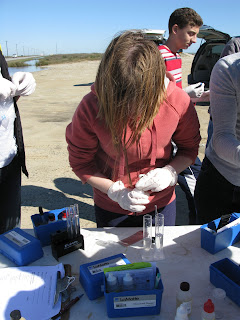 Renee had a face full of hair thanks to the wind! 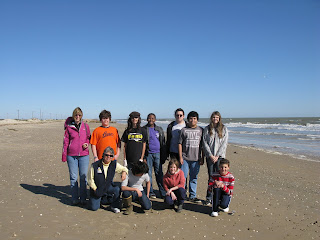 Angela Larsen is on the left in the pink jacket.
After all SMORE students had sampled, we held another teleconference with Alaska and Georgia to compare our data.  This is always really cool talking to each other and sharing fun stuff along with the science! Check out the video in the video section of this blog!

We only have one more sampling to do! Can we really be almost done? Time has gone by too fast.
Overall, this winter fieldwork was a very pleasurable experience for all of us. We learned more, tested correctly and had fun. Everyone agreed that we thought we did a much better job this time!

Hope to see you again soon!! 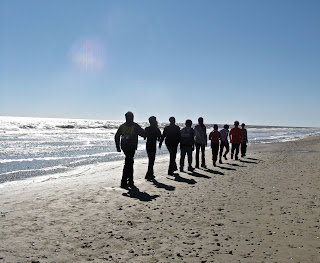